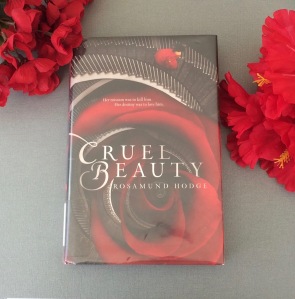 “Graceling meets Beauty and the Beast in this sweeping fantasy about one girl’s journey to fulfill her destiny and the monster who gets in her way-by stealing her heart.

Based on the classic fairy tale Beauty and the Beast, Cruel Beauty is a dazzling love story about our deepest desires and their power to change our destiny.

Since birth, Nyx has been betrothed to the evil ruler of her kingdom-all because of a foolish bargain struck by her father. And since birth, she has been in training to kill him.

With no choice but to fulfill her duty, Nyx resents her family for never trying to save her and hates herself for wanting to escape her fate. Still, on her seventeenth birthday, Nyx abandons everything she’s ever known to marry the all-powerful, immortal Ignifex. Her plan? Seduce him, destroy his enchanted castle, and break the nine-hundred-year-old curse he put on her people.

But Ignifex is not at all what Nyx expected. The strangely charming lord beguiles her, and his castle—a shifting maze of magical rooms—enthralls her.

As Nyx searches for a way to free her homeland by uncovering Ignifex’s secrets, she finds herself unwillingly drawn to him. Even if she could bring herself to love her sworn enemy, how can she refuse her duty to kill him? With time running out, Nyx must decide what is more important: the future of her kingdom, or the man she was never supposed to love.”

Nyx, in the begging of the book, she acts like she’s ok but on the inside, she’s full of bitterness especially towards her sister. She loves her sister but she also resents her for being happy. As the book goes on Nyx starts to annoy me, she’s so indecisive about everything. Uh, she just needs to make up her mind. She was sassy, feisty and as the book goes on you see Nyx start to lose some of the resentment in her heart but that doesn’t last long. I didn’t really like Nyx. She complained about everything and I just found her irritating.

Ignifex seems very bipolar. One second, he’s all arrogant and playful and the next he’s furious at something. He is flirty, cocky and liked to mess with Nyx’s head. Ignifex seemed a little closed off when it came to his past and as the book goes you get to see why. I also wasn’t the biggest fan of Ignifex. I liked when he was playful but he starts to lose that as the book goes and I didn’t see his playful side as much as I wanted too.

Shade is the exact opposite as Ignifex, he’s gentle and calm but he’s not all he appears to be. Shade is a mystery. He is Ignifex’s shadow and can’t talk unless its night. I liked Shade at first but as the book goes on I lost interest in him.

The plot starts off with Nyx about to get married off and you can immediately see how much she resents her family and the gentle lord. The book starts to feel slow as it goes on, I feel like I was just waiting for something to happen. There was a lot of mention of past Greek gods and other demons and I found those parts really dull and boring. When the book does start to speed up I got confused about what was happening.

There was kind of a love triangle between Nyx, Ignifex and Shade but not really and you’ll find out why if you read the book. But for both of them, the relationship is really fast. As soon as Nyx and Shade have an actual conversation Nyx kisses him. As for Ignifex, she hates him for most of the book but then all of a sudden there’s a short chapter with her talking about how her feelings are changing for him but the chapter before she literally told him she hated him. I did not like the romance in this book at all.

Overall, I rate this book a 1 out of 5. I didn’t really like any of the characters, the plot was eh and the romance seemed to speed up. This was supposed to have some sort of inspiration to beauty and the beast but I didn’t really see it. I mean there was a curse but if anything, both Nyx and Ignifew were the beasts. This book is the first to be kicked off. I hope you’ve enjoyed this post, you’ve just been reviewed.